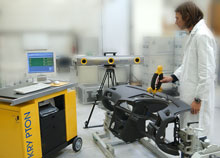 These compact, portable measuring systems, manufactured by Krypton, combine three CCD cameras in an environmentally stable carbon-fiber frame with an ergonomically designed LED-driven probing device to measure large parts, such as sheet metal assemblies, dies, molds, car bodies, automotive interiors, and fixtures where they are located on the shop floor. Optional LEDs can be attached to the part and software added to the system to transform the CMM into a tool for dynamic measurement. With this Dynamic Measuring Machine (DMM) option, the motion of parts within their assemblies, such as the movement of a door in an automobile body, can be easily measured, calculated, and graphically displayed.

Fast, Efficient Data Capture
Operators measure workpiece features using a simple handheld Space® Probe equipped with nine infrared LEDs. The operator records dimensional data by touching the workpiece feature with the Space Probe and triggering the probe's LEDs, sending a signal back to the CCD cameras. The data point is recorded through the process of triangulation. Using the Dynamic Referencing feature, the initial alignment of a workpiece is saved through the placement of LEDs directly on the part. Even if the workpiece and the system are moved, the part can be automatically realigned, saving time and improving inspection throughput.